WHY IS JERUSALEM SO CONTROVERSIAL? 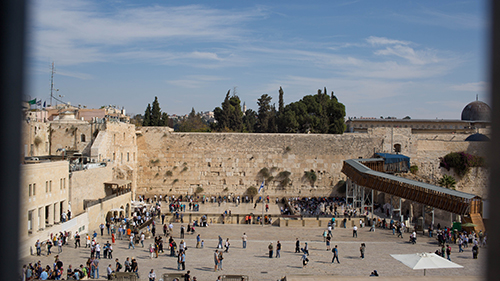 JERUSALEM­—it’s a name which stirs a wide spectrum of emotions and a quagmire of international disagreement. Here are several reasons for the multilayered controversy over Jerusalem.

THE UNITED NATIONS, WAR OF INDEPENDENCE, AND SIX DAY WAR

Over the last 150 years, as Jerusalem expanded beyond the ancient walls of the Old City, Jews and Arabs lived interspersed on both the eastern and western sides. A complicating factor was introduced in 1947 when the United Nations drew up the Partition Plan, offering swaths of land for both Jewish and Arab states, and keeping Jerusalem separate as an internationally managed city. The Jews begrudgingly accepted the plan and declared statehood, while the Arabs rejected it outright and, instead of statehood, declared war on the new-found Jewish State.

At the end of the 1948 War of Independence between Israel and the armies of Egypt, Jordan, Lebanon, Syria, and Iraq, armistice lines were drawn on a map with a green pen­—still known today as the Green Line. Jerusalem became a divided city: Israel controlled the western part and Jordan controlled the eastern part. For the next nineteen years, Jordanians prevented Jews from accessing Jerusalem’s Old City and Western Wall of the Temple Mount, Judaism’s holiest site.

In 1967 the Six Day War broke out with the surrounding countries. Israel won the war, capturing the rest of Jerusalem and, for the first time since 1949, allowing the Jewish people to worship at the Western Wall. Israelis offered Arabs full citizenship and many accepted, while others accepted Permanent Resident status. For fifty years now, an undivided Jerusalem has thrived under Israel’s governance, and all three faiths have enjoyed full access to their holy sites.

ISRAEL DECLARES JERUSALEM AS ITS ETERNAL, UNDIVIDED CAPITAL IN 1980

The Jerusalem controversy intensified in 1980 when Israel’s Knesset declared all of Jerusalem as their eternal, undivided capital. An outcry sounded across the world. The United Nations refused to recognize Israel’s decision and urged embassies in Jerusalem to relocate, wherewith they vacated the city for Tel Aviv. In response a small group of resolute Christians founded the International Christian Embassy Jerusalem (ICEJ). Since 1980 the ICEJ has mobilized Christian support for the State of Israel and the Jewish people worldwide. In the ensuing years, Israel’s government has recognized the ICEJ’s important outreach to all the country’s communities, including Jews, Arabs, Muslims, Christians, Druze, and Ethiopians.

Jerusalem was forced into a more dangerous quagmire under the tutelage of Palestinian Authority leader, Yasser Arafat. In 1993, after the Oslo Peace Accords, Arafat moved to Israel and set out on a disinformation crusade. He renamed the local Arabs as “Palestinians,” incited Intifadas, and proclaimed the goal of Palestinian statehood with Jerusalem as the capital, even though “Palestine” had never before been a nation.

Arafat’s repeated declaration of Jerusalem as the Palestinian capital sent shock waves into Israel and beyond. In recent decades, the United Nations has positioned itself squarely on the Palestinians’ side and has become a veritable playground of anti-Israel resolutions, while the Palestinians themselves refuse direct negotiations with Israel.

US CONGRESS STANDS IN SUPPORT OF A UNITED JERUSALEM

Many streams flood into this river of controversy, but the United States Congress has been a consistent champion for Israel—both Democrats and Republicans. In 1995, Congress passed the Jerusalem Embassy Act which recognized Jerusalem as the capital of Israel and legislated that the US Embassy should move there from Tel Aviv. A caveat in the legislation allowed the last three presidents to delay that move. However, moving the US Embassy is now a hot topic as President Trump has declared his intention to relocate the US Embassy to Jerusalem.

For the worldwide Jewish community, Jerusalem is at the heart of their faith and was established by King David as the capital of the Jewish people some 3,000 years ago. Jerusalem was also the focal point during 2,000 years of Jewish Diaspora as they longed for their ancient homeland. For Christians, Jerusalem is particularly significant: it is the ancient Jewish city where Jesus walked, taught, lived, died, and rose again some 2,000 years ago. The Muslim world reveres Jerusalem and believes their prophet ascended from there on his Night Journey.

The problem is not in the close proximity of holy sites belonging to three different religions but when one of those religions shows disrespect for the others.  The Muslim Jordanian armies destroyed all of the synagogues in the Old City of Jerusalem and refused access to Jews who wanted to pray at the Western Wall.  The Jewish Israeli government has shown respect to all three faiths and allowed freedom of access to all sites.  The only religion not having free access to all of their holy sites is the Jewish faith, whose believers can not pray on top of the Muslim-controlled Temple Mount.

It is time for international powers to recognize the peace and religious freedom that Israeli governance has maintained and stop attempts to delegitimize their rule over the city. As a Christian organization, the ICEJ applauds the Israeli government for our freedom of worship and access to holy sites.

For students of the scriptures it is not surprising that the mention of the name Jerusalem draws such a lightning rod of controversy; it is predicted. Zechariah 12 even contains dire warnings of the consequences of this type of international opposition to Jerusalem and pursuit to take control of the city—a warning the nations should certainly heed:

And it shall happen in that day that I will make Jerusalem a very heavy stone for all peoples;
all who would heave it away will surely be cut in pieces,
though all nations of the earth are gathered against it. (Zech. 12:3, NKJV)

Susan Michael is the US Director of the International Christian Embassy Jerusalem www.icejusa.org, creator of the  www.IsraelAnswers.com educational website on Israel and Christian Zionism.