Why Is Israel So Controversial? 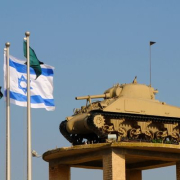 There are two competing views of Israel. The first is that the Jewish State is a miracle and cause for celebration. The second is that Israel is a calamity and should be exposed and opposed. How can there be two polar opposite opinions, and what makes Israel so controversial?

Long before Trump came up with the term, Israel was the target of false news. As a young student in Israel in the 80s, this perplexed me. What was really the truth? What I saw was so different from how the media portrayed Israel. We now call these lies “fake news.”

We also learned not to go by what the Arab leaders said to the western world in English but what they said to their own people, especially in Arabic, because it differed significantly. One of the most well-known examples is Yasser Arafat, head of the Palestine Liberation Organization (PLO), who in 1993 met with the prime minister of Israel at the White House, shook hands, and started what the West thought were steps toward peace with Israel. However, soon after, while he spoke in a mosque in Johannesburg, South Africa, a leaked recording of Arafat’s remarks to the Muslim faithful revealed his true intent:

The Jihad [Islamic holy war] will continue, and Jerusalem is not [only] for the Palestinian people, it is for all the Muslim nation. You are responsible for Palestine and for Jerusalem before me. . . . This agreement, I am not considering it more than the agreement which had been signed between our prophet Mohammed and Quraysh.

The agreement he referred to is well known within Islam. Mohammed had been unable to conquer Mecca, so he made a 10-year agreement with the ruling Quraysh tribe that allowed him to enter Mecca to pray. After just two years, he had built up his military forces enough to abrogate the agreement, slaughter the tribe of Quraysh, and conquer Mecca.

Arafat never intended to live in peace with Israel and used the peace process for personal gain. Western leaders refused to believe he meant this and awarded him a Nobel Peace Prize. He later turned down all offers for peace and started the bloody Second Intifada.

Israel is also up against ruling ideologies in our world today, such as globalism, secularism, and moral relativism. Israel flies in the face of all three of these.

First, Israel is a nation-state based on nationalist aspirations of the nineteenth-century Zionist movement. Globalism wants to do away with national boundaries and depicts nationalism as being racist or divisive.

Second, Israel is a Jewish state created for the sovereignty and freedom of the Jewish people. Therefore, government holidays and societal norms are based on the Jewish religion. This flies in the face of the ruling ideology of secularism, whose proponents look down on a state that reflects the majority religion of its citizens.

Third, the world is increasingly relativistic in its morality. With moral relativism, there is no right and wrong, no truth and falsehood, no black and white—everything is grey and each person decides what is true or false, moral or immoral. The people of Israel gave the world the Bible and the 10 commandments upon which we base our system of jurisprudence. Moral relativists despise the Bible and the Judeo-Christian ethos based upon it, insisting they are antiquated and bigoted.

A global study of antisemitism conducted in 2014 determined that 25% of the world’s population holds antisemitic views. Of that 25%, an astounding 70% had never met a Jewish person proving the problem is one of propaganda, misinformation, and disinformation. Lies and conspiracy theories have destroyed the Jewish people’s reputation for 25% of the world’s population. It’s a global problem that can’t be solved overnight. The Jewish people cannot turn this situation around on their own and need our help to do so.

Finally, Israel is fighting a spiritual war not easily understood. However, three verses in the Bible offer a clear biblical explanation for it. The first is Genesis 3:15, where the Lord says there will be enmity between the serpent and the woman until her seed crushes the head of the serpent. In the end, the Messiah will defeat evil, but first, spiritual forces will direct this enmity and hatred toward the woman.

The second is Psalm 83:1–4, which says God’s enemies are conniving to destroy His people Israel so that even their name will never be uttered again. This spiritual enmity against God and His people is reflected in military confrontations and governments.

The third reference to this spiritual war is found in the New Testament book of Revelation, chapter 12, in which Israel is described as a pregnant woman crowned by the sun, the moon, and 12 stars, which represents the 12 tribes of Israel. An evil dragon sits at her feet, waiting to devour the male child, and when he fails, comes after the woman. The age-old animosity of the serpent in Genesis is now depicted in the dragon.

Christians and Jews Together

Revelation 12 goes on to describe that when the dragon is unable to destroy the woman—the people of Israel—he goes after her “other offspring, those with the testimony of Jesus” (v. 17). The church was born out of the Jewish faith and people, and we, too, suffer in this spiritual fight. The evil pursuit is against the woman (Israel), her male child (the Messiah), and the woman’s other offspring (the church of Jesus Christ).

This helps explain the shocking hatred for Christianity in our days, particularly Bible-based, Evangelical Christianity. We, too, are being openly maligned, hated, and falsely accused by the proponents of globalism, secularism, and moral relativism.

We are in this together and must stand in solidarity with one another. Whereas the Jewish community may be small, Evangelical Christianity claims over 800 million worldwide. Many Christians pray for the peace of Jerusalem and seek to bless the Jewish people. However, more need to be educated and mobilized to speak out in opposition to these ideologies and bring an end to the controversy of Israel.