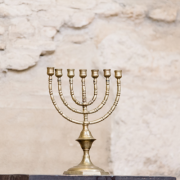 (Part 5 of a 5 Part Series - Scroll down for video and audio podcast.)

The biblical basis for Christian support for Israel is extensive and is not from one isolated section of the Bible but found throughout. Old Testament covenants involving the calling of the Jewish people and their gift of land are affirmed in the Psalms, the prophetic books, and the New Testament.

The first book of the Torah—and of the Bible—is Genesis. It tells the story of God’s choice of Abraham to birth a nation through whom He would carry out His plan to redeem fallen mankind. In Genesis 12:1–3 God explains that in return for following Him in faith, Abraham would be given a land and made into a great nation that would be a blessing to all the families of the earth. In Genesis 15 God legally guarantees His promise by making a covenant with Abraham, and in chapter 17 He explains that this covenant is to be everlasting as will be its provision of land.

Psalm 105 waxes poetic how the Abrahamic covenant and its promise of land—confirmed to Isaac, Jacob, and all of Israel—is an everlasting covenant. It cannot be broken.

The Hebrew prophets agreed with the Psalms, and while they witnessed the devastation of judgment on the people for their sins, they prophesied of a day when God would bring His people back home, establish a right relationship with Him, and fulfill their calling to bless the world. One such prophet was Isaiah.

The Jerusalem that Isaiah prophesied to had not yet been destroyed but was corrupt and fully deserving of it. One day, however, it would be a city praised for its righteousness when the glory of God would shine out from there throughout all the earth. Isaiah knew that day was as sure as any promise Israel’s faithful God had made, and He called upon intercessors to partner in prayer until it happened. Anyone who prayed was asked to be as a watchman on the walls, crying out in persistent prayer until God fulfilled His promise to establish Jerusalem as a praise in all the earth.

That day has not yet taken place, but the words of Isaiah still ring forth. Those of us who know the Lord are called to intercede for the city and its people until God has fulfilled all that He has promised.

Moving now to the New Testament, we find the apostle Paul reflecting upon the everlasting nature of God’s promises to the Jewish people and the source of blessing to the world they are still to be.

In Romans 11:28–29 Paul confirmed that the Jewish people are beloved of God and their election secure as He had promised their forefathers. He went so far as to say that even though they might be considered an enemy to the gospel of Christ, their gifts and calling have not been revoked. Neither their rejection of Jesus’ messianic credentials nor exile from the land would annul God’s covenant with Abraham that included a gift of land and a calling to bless all the families of the earth with redemption.

Paul, therefore, instructed the church in Rome to approach the Jewish people with humility and honor them as the spiritual root of our Christian faith. Everything we hold dear as Christians came to us through the Jewish people, and we owe them a great debt of gratitude. God used their rejection to bring about the atoning death of Jesus and cause the gospel to go out to the gentiles. Once the fulness of the gentiles has come into the church, He will turn again to reveal Himself to the Jewish people, and their acceptance will be a blessing to the entire world.

With such a firm biblical foundation for support of the Jewish people, it is no surprise that many of the fathers of the Bible-based Evangelical Christian movement preached the return of the Jewish people to their ancient homeland and the blessing this return would bring upon us all. Modern Christian supporters of Israel follow in the steps of great Christian leaders, such as John and Charles Wesley, Robert Murray MacCheynne, Charles Spurgeon, and many Puritan preachers, to name a few.