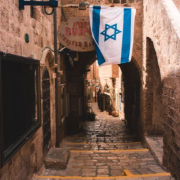 Since the founding of Israel almost 75 years ago, millions of Christians have visited Israel and its holy sites. Many of them have experienced their Bible come alive and their faith renewed. It only stands to reason they would return home with excitement and a new found appreciation for the country that afforded them that experience.

This was certainly my story. I was a 19-year-old biblical studies major in university when I had the opportunity to study in Israel for the summer. The Bible I read on a devotional level every day and studied in class at a theological level became three-dimensional in its historical, geographical, and cultural setting. It came alive!

A trip to Israel can truly be transformational. I have never been the same, and ever since, I have been an ardent supporter of Israel for affording me this wonderful opportunity.

This helps explain what experts have noted that tourism to Israel is different than elsewhere because of the repeat visits. Most people who tour the Holy Land spend their flight home planning their next trip because a tour to Israel is an educational, spiritual, and life-changing experience. It is a spiritual retreat—a pilgrimage—rather than a vacation, and Israel warmly welcomes and encourages this.

Christian tours also benefit from the freedom Israel provides to access Christian holy sites. This would not be the case if it were a closed country like many Muslim or communist countries, where we would not have access to sites so central to our Bible and faith. We should be thankful for the freedom we have to visit religious sites and even hold prayer and worship services while there.

Care of Sites and Artifacts

Israel also takes great effort to preserve holy sites and archaeological finds. In contrast, Muslim authorities literally bulldozed and discarded archaeological debris from under the Temple Mount during a construction project. Despite the tremendous historical importance of that area that archaeologists had never excavated, construction crews removed approximately 9,000 tons of archaeologically rich soil in 1999, dumping 350 truckloads of that dirt into the Kidron Valley.

The Muslim authorities over the Temple Mount did not want to preserve any artifact that proved a Jewish or Christian connection to the site, so they had no problem destroying and disposing them. As a result, two archaeologists started the “Temple Mount Sifting Project,” and over 200,000 volunteers and tourists have helped sift through the debris. They have found over 400,000 artifacts dating back to the Stone Age. Fifteen percent of the pottery finds come from the First Temple period and over forty percent from the Second Temple period.

Israel would never have done what the Muslim authorities did. They would have conducted a proper excavation and cataloged remains before any such construction project could begin. Christians should appreciate Israel’s preservation of artifacts, so many of which prove the accuracy of the Bible and are meaningful to our faith.

Another reason for Christian support of Israel has nothing to do with tourism: the well-being of the Christian minority in Israel. While religious minorities face intense persecution across the Middle East, Israel provides the only haven for Christians in the region. Christianity is becoming extinct in much of the region, but it is growing in Israel. We should support Israel for the safety of the Christian minority and the opportunities they have as full citizens of the Jewish state.

Israel is a blessing to Christians around the world, and we owe the people of Israel a great debt of gratitude.