Why Christians Care about Annexation 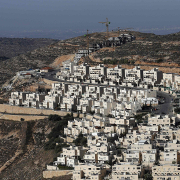 I have engaged with a number of reporters lately, both on and off the record, concerning the Trump peace plan. And one question keeps coming up: Why should Christians care about whether or not Israel annexes more territory in the West Bank? So for the record, here are some valid, sincere reasons why Christians should—and—do care about Israel and its current debate over whether to annex parts of Judea/Samaria in the context of the Trump plan.

Because so many Christians were hostile to the Jewish people down through history, we view it as our moral duty as Christians today to stand with Israel and against those who are hostile to the modern Jewish state and its people. There are simply too many nations and peoples who treat Israel unfairly and even loathe its existence without just reason or cause. So we are determined to stand against the rising tide of anti-Semitism, the rampant anti-Israel media bias, the stone-hearted threats of sanctions and violence, and the outright bullying of Israel in international forums.

We are simply standing for fair treatment of the Jewish nation and people in hopes it will create a more level playing field for Israel. The UN Security Council’s adoption of resolution 2334 in December 2016 is a prime example of the lopsided and prejudicial decisions routinely made against Israel. By declaring that the entire West Bank and eastern Jerusalem are “occupied Palestinian territory,” the international community ran roughshod over four millennia of Jewish claim and connection to the Land of Israel.

So when Israel is debating whether to assert its rightful historic claim and title to the biblical heartland of ancient Israel, Christians are interested—and we have every right to be.

Israel is a democratic state whose legitimate historic right and claim to the Jewish homeland was duly recognized by the international community not so long ago. Thus, “annexation” is not really the proper word for what Israel is considering, as it normally connotes the hostile taking of another’s property. Rather, Israel would simply be asserting sovereignty on lands it currently possesses and over which it already has a valid historic claim. Yet the world blithely treats it as an attempt to steal someone else’s lands.

Admittedly, there is a rival Palestinian claim to these same areas but of such recent origin that it pales in comparison to the longstanding Jewish title over eretz Israel. The people of Israel must decide whether to compromise on their superior land claim for the sake of peace. And as Christians, we respect Israeli democracy and the right of its people to make this decision free of outside interference or threats. Thus, with great empathy and care we will be watching the annexation debate and will stand with Israel as it wrestles with this complex and consequential decision.

To build their rival nationalist claim to the historic Land of Israel, the Palestinians have found it necessary to deny any Jewish connection to the Land, and particularly, to Jerusalem. In doing so, they have decreed our Bible—both Old and New Testaments—to be full of falsehoods concerning the ancient Jewish presence in this land. This would mean King David did not rule over a large Israelite kingdom from his palace in Jerusalem, as recorded in the Hebrew Bible, and that Jesus did not enter and teach in the courts of the Second Temple as the Gospels all say.

That should capture Christians’ attention, and rightly so! The Palestinians also have routinely damaged and destroyed important biblical sites that bear the archaeological proof that ancient Israel once inhabited the land. So Christians are standing for truth and the preservation of history when we partake in the debate over the fate of the disputed territories.

Christians believe God made a covenant promise to Abraham to deliver the entire Land of Israel as an “everlasting possession” to his descendants. How and when God ultimately fulfills that promise is up to Him. But we do believe the modern-day return of the Jews to the Land of Israel, including the mountains of Judea and Samaria, is part of God keeping His covenant promises to the Jewish people concerning their land inheritance.

Our Bible also says that God scattered them from the Land for corrective and redemptive purposes, while at the same time vowing that He would always regather them to the Land of Israel one day. Thus, we consider it a matter of historic justice that the Jews have returned to their homeland in modern times. And since Christians also serve the same God as the Jewish people, our own faith is strengthened when we see Him being faithful to His promises to Israel concerning the Land.

So to answer the question, Christians have plenty of reasons for why we care so deeply about the annexation debate and how the Jewish people hope to maintain their enduring connection to their biblical homeland.