What Is the IHRA Definition of Anti-Semitism? 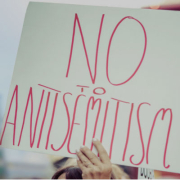 The International Holocaust Remembrance Alliance (IHRA), an intergovernmental organization mandated to focus on Holocaust-related issues, determined that, to address the problem of rising anti-Semitism, there must be clarity about what it is. Some 30 governments have now adopted their non-legally binding working definition of anti-Semitism, and efforts are underway to expand that to include international organizations such as the United Nations and their related agencies.

The definition drawn up by IHRA experts is: “Antisemitism is a certain perception of Jews, which may be expressed as hatred toward Jews. Rhetorical and physical manifestations of antisemitism are directed toward Jewish or non-Jewish individuals and/or their property, toward Jewish community institutions and religious facilities.”

One unique and extremely helpful aspect of the IHRA definition is the list of examples of anti-Semitism it includes. These examples make it clear that anti-Semitism does not just target Jewish individuals but the Jewish State—Israel. Criticism of Israel similar to that leveled against any other country cannot be regarded as anti-Semitism. But applying double-standards to Israel does, as well as using images and symbols from classic anti-Semitism and the Nazi regime when speaking of Israel.

IHRA has also addressed their spelling of the term “antisemitism,” often written with a hyphen (as in this article: “anti-Semitism”). The unhyphenated spelling is favored by many scholars and institutions to dispel the idea that there is an entity “Semitism,” which “anti-Semitism” opposes. The conjunction of the prefix “anti” with “Semitism” indicates anti-Semitism as referring to all people who speak Semitic languages or to all those classified as “Semites.”

However, since its inception, this term referred to prejudice against Jews alone. IHRA feels anti-Semitism should be read as a unified term (“antisemitism”) so that the meaning of the word for modern Jew-hatred is clear. Both spellings are correct and definitions are the same.*

Why This Definition Is Needed

The IHRA Definition is an important tool for education and guidance on anti-Semitism. As anti-Semitic incidents have increased worldwide, governments and civil society can use the definition to identify modern expressions of anti-Semitism better. Many seek ways to speak out against anti-Semitism, but the first step is to define and identify it and understand its impact.

What It Is Not Intended to Do

The definition should not be viewed as legal code. Some countries already have laws against anti-Semitic acts such as Holocaust denial, discrimination of Jews, or the distribution of anti-Semitic materials that should remain. In other countries, some aspects of the IHRA definition, if put into law, might infringe upon freedom of speech. Each country needs to assess how best to adopt and use the IHRA definition.

Some liberal groups are pushing back against the IHRA definition because they feel it is too restrictive on criticism of Israel that, in their eyes, is warranted. The definition makes clear that “criticism of Israel similar to that leveled against any other country cannot be regarded as antisemitic.” However, the definition has become divisive; some activists have sought to give it the force of law, and others are claiming it infringes upon their right to free speech.

Today, governments, campus administrators, law enforcement bodies, and civil society organizations around the world are using the IHRA Definition. It has proved to be an important tool to help educate on anti-Jewish bias, assess claims of anti-Semitism, assist in identifying whether a crime might also be categorized as a hate crime targeting Jews, and aid in determining the impact of certain behaviors.

In a December 2019 executive order, the Trump administration instructed the Executive Branch to consider the IHRA definition, including its 11 examples, when investigating civil rights complaints—including those filed to the Department of Education’s Office of Civil Rights regarding alleged discrimination on campus. The Conference of Presidents of Major American Jewish Organizations, a coalition of establishment Jewish groups, sent a letter to Biden asking him to adopt the IHRA definition. The ICEJ organized a similar letter signed by 140 Christian leaders under the American Christian Leaders for Israel network.

The US government needs to join the growing list of countries that have adopted the IHRA definition, which would give all agencies the necessary tool to identify anti-Semitism and stop its growth.

* Recognizing both spellings as correct, the Word From Jerusalem continues to hyphenate “anti-Semitism.”