What the Abraham Accord Means for Israel 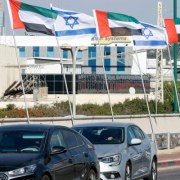 The presence of United Arab Emirates officials earlier this year at the announcement of President Trump’s plan for peace between Israel and the Palestinians hinted at a growing collaboration between Israel and the Emirates. The two have now struck a historic deal, dubbed the Abraham Accord, which is perhaps the most significant step ever towards regional peace for the Jewish State. The United Arab Emirates joins the short list of Middle Eastern countries with normalized diplomatic relations with Israel—alongside Jordan and Egypt. However, this agreement also signals a new alliance in the Middle East in response to heightened tensions with Iran.

The peace agreement between Israel and the United Arab Emirates will reap significant diplomatic and economic benefits for the two parties as they sign several agreements regarding investment, direct flights, technology, agriculture, security, tourism, the exchange of embassies, and robust people-to-people relations. Considering the advancement of both countries within a war-torn, undeveloped Middle East, the deal is expected to bring region-wide economic growth, technological innovation, increased stability, and respect for human rights.

Moreover, normalized relations between the two countries are expected to encourage other Gulf countries to follow suit, notably Bahrain and Oman, which could happen as soon as in a few weeks. Even Saudi Arabia is quiet and may be awaiting their turn at the table.

When questioned by reporters about reneging on his promise to expand sovereignty, Prime Minister Netanyahu of Israel promised that expansion is still very much “on the table.”  US Ambassador to Israel David Friedman emphasized all parties understand it to be a temporary “suspension” of sovereignty and not a cancellation. He could not say how long this suspension would last but explained it was to allow time to negotiate other peace agreements.

How might this compare to previous international agreements for Israel?
Although this agreement is the third of its kind between Israel and an Arab country, it is an occasion of its own in different respects. Foremost, the deal between Israel and the United Arab Emirates did not involve surrendering any land between the two countries—only the “suspension” of Israel’s planned extension of sovereignty. Israel gave up the entire Sinai Peninsula in 1979 to Egypt in exchange for peace and had to negotiate territorial disputes with Jordan in 1994 to normalize relations.

Furthermore, unlike with Egypt and Jordan, Israel has never been at war with the United Arab Emirates. This history void of direct conflict opens up the possibility of warmer people-to-people relations.

Strategically, the deal is larger than itself and is the beginning of an expansion of alliances to the Persian Gulf in order to face a regional foe—Iran.

Undoubtedly, the deal will hinder the Palestinians’ ability to leverage the Arab League against Israel in times of conflict or negotiations. Amos Yadlin, former general for the Israeli Air Force, recently asserted on television, “America is sending a clear signal to the Palestinians: ‘You have no veto power, you have no Arab support; don’t miss another opportunity, don’t ignore Trump’s peace plan.’”

What does this mean for President Trump and Prime Minister Netanyahu?
Without a shadow of doubt, the success achieved between the countries would not have occurred without the bravery and boldness of US President Trump, Prime Minister Netanyahu of Israel, and Sheikh Mohammed Bin Zayed, Crown Prince of Abu Dhabi and Deputy Supreme Commander of the United Arab Emirates. This is a major foreign policy success for President Trump, who was responsible for brokering the deal between the two countries.

On the other hand, Prime Minister Netanyahu enjoys the accolade of being the first leader of Israel to normalize diplomatic relations with a Gulf country successfully. As this regional alliance takes shape, and should Saudi Arabia come to the table, it will not just be another accomplishment for Netanyahu but another miracle in Israel’s story.

Listen to the Podcast hosted by Charisma about the Abraham Accord with special guest Susan Michael.