The Strategic Importance of the Jordan Valley 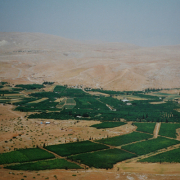 President Trump’s proposed peace plan for Israel and the Palestinians allows for Israel’s annexation (extension of sovereignty) of the major settlement blocks in the “West Bank” as well as the Jordan Valley. While the overall plan has been touted as the best plan presented thus far, it does allow for an eventual Palestinian State should the Palestinians come to the table. In the meantime, indications are that Israel can go ahead and begin extending sovereignty over those areas she requires in any future agreement.

The Trump administration previously recognized Jerusalem as the eternal capital of Israel as well as Israel’s sovereignty over the Golan Heights, both recognitions that Israel had long-awaited. This peace plan seems to be opening another historic door for Israel to solidify the defensible borders she needs.

Is Annexation the Right Word?

Some analysts argue it is incorrect to use the term “annex” for territory to which Israel already has a legitimate claim. It is even dangerous because the Rome Statute of the International Criminal Court defines “annexation by the use of force of the territory of another State of part thereof” as “constituting the grave Crime of Aggression.” To describe Israel’s extension of sovereignty as “annexation” implies the territory belonged to another State and Israel is committing an illegal act, making her vulnerable to claims and legal rulings by the ICC.

Neither the settlement blocks nor the Jordan Valley were territories of another State. They were Ottoman Empire territories that the British mandate, ratified by the San Remo conference in 1920, designated for a Jewish state. Jordan illegally occupied them from 1948–1967 when Israel took control of them. It is therefore disputed territory belonging to Israel that the Trump plan allows Israel to “extend sovereignty” over.

Last month’s Israel Answers article discussed this issue as it relates to the settlement blocs, and in this article, we will discuss the importance of the Jordan Valley specifically.

The “Jordan Valley” is used here to include the lower course of the Jordan River, from the spot where it exits the Sea of Galilee in the north, to the end of its course, where it flows into the Dead Sea in the south. The valley is a long and narrow trough roughly 65 miles long. This valley includes the lowest elevation in the world, and on both sides—to the east and west—it is bordered by steep cliffs rising as high as 3,900–5,600 feet high.

The majority of the Jordan Valley is already administered by Israel, as it forms part of the West Bank’s “Area C” as outlined in the Oslo peace accords of the 1990s. Eighty-six percent of the land is Israeli farmland due to its year-round agricultural climate, fertile soils, and water supply. It is strategic militarily because it forms the border between Jordan to the east and Israel (and the West Bank) to the west and is regulated by the Israel-Jordan peace treaty of 1994.

The Jordan Valley has long been considered Israel’s preferred eastern border, and sovereign control over it will ensure Israel’s ability to respond to security threats from both Jordan to its east and the Palestinians to its west. Strategic positioning of this kind will prove far more effective and peaceful in the long run than the intervention of foreign military assistance or military technology used in conflicts in the past.

Israel’s requirement that a prospective Palestinian state be demilitarized has been known since the 1993 Oslo process and the establishment of the Palestinian Authority (PA). The requirement is a means of safeguarding Israel’s security by preventing the development of military threats against Israel—including conventional warfare, terrorism and guerilla warfare—from and via the Palestinian territories. The only way to keep illegal weapons from entering the demilitarized Palestinian zone is for Israel to maintain control of its borders.

Jordan gave lip service to cutting ties with Israel in response to the “annexation” but has no interest in conflict with Israel. It is Israel and the United States, not the Palestinian Authority, that bring peace and stability to Jordan. One senior Jordanian official reporting to Israel Hayom newspaper asserted:

As expected, Jordan will beat its chest loudly in support of the Palestinian people while treasuring its strategic ties with Israel in a quiet manner.

In conclusion, the chance to extend sovereignty to the Jordan Valley and major settlements is a unique opportunity. Everything, at least momentarily, is in place for such a move: the strong support of the White House; developing security and economic ties with Sunni Arab countries that will prevent legitimate pushback; and a strong Israeli security presence that is capable of deterring Palestinian unrest. This stated, Israel’s local friendships are not guaranteed tomorrow, and American support for such action rests on a shaky reelection bid for President Trump. If Israel desires to obtain defensible borders for the future, now is the time to act swiftly.