No Stopping the Abraham Accords 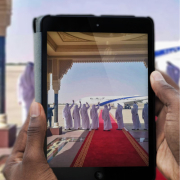 The series of normalization agreements that Israel recently signed with four Arab nations—known collectively as the “Abraham Accords”—continue to bear fruit for Israel despite several diplomatic hiccups with Sunni Arab leaders and the lack of interest shown by the new Biden administration in Washington.

Over recent months, Israeli officials, businessmen, and tourists have been eager to explore the newly minted relations between the Jewish state and the Arab nations of Bahrain, Morocco, Sudan, and the United Arab Emirates (UAE). Morocco and the UAE are especially keen to welcome Israeli tourists and shoppers, while wealthy Emiratis are lining up to invest in Israeli start-up companies. One report revealed that a group of Emirati investors is set to sink $10 billion into Israel’s energy, manufacturing, water, space, healthcare, and agri-tech sectors. Meantime, Bahrain named its ambassador to Tel Aviv, while Sudan canceled its boycott of Israel. For its part, Israel is hoping to host increasing numbers of Arab and Muslim pilgrims coming to see Jerusalem’s Islamic shrines once the coronavirus travel bans are eased.

Nevertheless, there have been a couple of speed bumps along the way. For instance, UAE officials deferred on Israeli Prime Minister Benjamin Netanyahu’s request to pay a historic visit to Dubai in early March because they reportedly did not want the Abraham Accords to be used as a campaign issue in Israeli elections.

Netanyahu’s route to Dubai also was blocked when Jordan refused to allow his plane to use Jordanian airspace on the way. The move was seen as retaliation for Israel’s demand that Jordan’s Crown Prince Hussein bin Abdullah reduce the size of his large security detail ahead of a planned visit to Jerusalem.

Another possible drag on the burgeoning relations is the disinterest of the Biden administration in promoting the deals. In fact, State Department officials are refusing to even use the term “Abraham Accords,” likely because of its close association with former president Donald Trump. Instead, they prefer to speak of building on the recent “normalization agreements”—even as they undermine them by coaxing Iran into a revived nuclear pact. One commentator even claimed it was Washington that insisted the UAE not welcome Netanyahu for a pre-election visit.

Ironically, the Biden team’s return to a policy of courting Iran is doing more to drive the Sunni Arab bloc closer to Israel than if the current White House were openly begging the Arabs to make peace with the Jewish state. Combine that with Israel’s stepped-up regional shadow war with Tehran, and the momentum of the Abraham Accords appears sure to continue bearing fruit—both in public and private.

The people-to-people contacts spawned by the Abraham Accords are perhaps their most promising facet so far. Israelis longed for warmer relations with ordinary Egyptians and Jordanians but were kept at bay by the rejectionist elites in Cairo and Amman. The Emiratis, however, have been quick to embrace Israeli visitors.

After hosting a successful get-acquainted webinar in January for Israeli and Arab businessmen, the pro-peace UAE-based group Sharaka held a groundbreaking online gathering on Yom HaShoah in April to mark Israel’s annual Holocaust Remembrance Day. Arab leaders and activists from throughout the Middle East openly lamented the lack of Holocaust education in the region and vowed to change that.

In another positive sign, the national rugby teams of Israel and the UAE played their first-ever friendly match in March to honor the Abraham Accords.

Another possible sign of progress is that, at least until the recent spate of violence, an Arab party in the Israeli Knesset was seriously considering joining a government coalition—at least by providing outside support. Some analysts see it as an indication that Israeli Arabs are finally starting to ponder why they should remain hostile toward their own country when other Arabs in the region are befriending Israel and reaping the benefits.

Meantime, many Arab Christians have been watching these developments in hopes they could have a positive spiritual impact on the region, according to Tom Craig, the ICEJ’s Middle East coordinator.

“We certainly are experiencing a paradigm shift in the region. As these Arab nations are willing to normalize relations with Israel, it’s opening up the whole idea of cultural exchange, commerce, and various ways to build relationships,” Craig says. “Even in Iraq and Saudi Arabia, there are opportunities for Christian outreach now that were not there before. In many of the Evangelical prayer houses in the region, we are seeing greater faith and boldness about expressing God’s plans for their nations and Israel.”