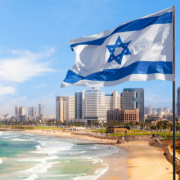 One of Israel’s primary founders and first prime minister, David Ben Gurion, said: “In Israel, to be a realist, you must believe in miracles.” He had witnessed the state’s founding after almost 2,000 years of exile. He had also witnessed five Arab armies attack the newborn state—armies equipped with artillery, tanks, armored cars, and some with air forces. Yet they were defeated by the ill-trained and inadequately equipped Jewish forces. Israel’s story is indeed filled with miracles.

The story of the founding of Israel is really quite a fascinating one. God had been at work for hundreds of years in the Christian world, in the Jewish people, and in the political arena to bring about the founding of the modern state of Israel. It could be described as the making of a perfect storm of global movements only God could have planned and orchestrated

The translation of the Bible into the vernacular and its mass production via the printing press shook Christendom. For the first time in many centuries everyday Christians could read their Bible. They began to discover that Jesus was not only Jewish, but Christianity was as well—and their Bible was full of promises that God had made to the Jewish people.

Their preachers began to teach from the Bible that the Jews would return to the land of Canaan one day. Evangelical Christians in Great Britain began to be called “Restorationists” because of their belief in the restoration of the Jewish people to their ancient homeland. This birthed centuries of Christians who not only preached about the return but prayed for it to happen, and some even got involved in the story.

A similar shaking occurred in the Jewish world when a secular, assimilated Jewish journalist in Austria named Theodor Herzl was assigned to cover an antisemitic court case in France. As he listened to the trumped-up charges against Captain Alfred Dreyfus, a Jewish officer in the French army, he concluded that there was no escaping antisemitism. The only hope for the Jewish people was to have their own state. He returned to his home in Vienna, Austria, and wrote "The Jewish State." His book helped to birth the Zionist movement.

When Christian Restorationist Rev. William Hechler read Herzl’s book, he knew this was the man who would be like a modern-day Moses to lead his people home. Because Rev. Hechler was a British foreign service chaplain, he was able to help Herzl to circulate this idea among political leaders.

The Breakup of the Ottoman Empire

While these developments were taking place amongst Jews and Christians, a rumbling began of a conflict that would change the entire political landscape of the world. WWI would result in the breakup the Ottoman Empire. After some 1,300 years of successive Islamic empires ruling lands from India to Spain, it was unbelievable to think these territories would be set free for self-rule—yet that is exactly what happened.

Thanks to the foresight of another Christian Restorationist, Lord Balfour, plans were put into place to establish a Jewish state in the area known as Palestine. Every other country in the Middle East has been created out of this same political process set in motion by the defeat of the Ottoman Empire. Israel's founding is as legal as any other country's founding in the region.

Only the Creator of the universe—the God of Abraham, Isaac, and Jacob—could have orchestrated this coming together of major Christian, Jewish, and political movements. Truly He is the One who holds the heart of kings in His hand and turns them however He wants(Proverbs 21:1).

The Miracle of Israel’s Achievements

While Israel’s birth was against all odds, and her military victories astounding, an even greater miracle is found in Israel's achievements.The Jewish State did not just survive—she thrived!

Israel is a vibrant democracy made up of citizens from over 120 countries. The multiethnic makeup of the society, religious diversity of the people, and geographic contrasts in the landscape make it one of the most fascinating and inspiring places to visit.

Because of the adversity they had to overcome, the Israeli people have learned how to be innovative and cutting-edge. This is reflected in their reputation as the Start-Up Nation and their advances in medicine, science, technology, agriculture, and water conservation.

Found deep in Jewish DNA, as expressed in their prayers, is a commitment to Tikkun Olam (“repairing the world”). This helps to explain why Israel is also leading the world in volunteerism. They have shared their resources and innovations with hurting people in over 140 countries and are often the first on the scene after any disaster.

Israel’s story is made up of many miracles. But the fact that this tiny country the size of the state of New Jersey is leading and blessing the world with innovation and volunteerism is the greatest of them all.

—Susan Michael is USA Director of the International Christian Embassy Jerusalem and host of the Out of Zion podcast.