Does Israel Have the Right to Annex Settlements? 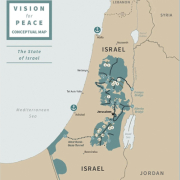 The Trump administration unveiled the long-awaited peace plan between Israel and the Palestinian people in January 2020. Perhaps the most realistic and balanced of any peace plan to date, it was rejected by the Palestinian Authority in less than two hours.

One of the most controversial pieces of the so-called “Deal of the Century” included the annexation of Jewish settlements in the West Bank, recognizing the land as part of the State of Israel. Thus the quagmire brings old questions to light regarding the legality of the settlements and Israel’s right to annex them.

The book of Genesis records God’s promise of the land of Canaan as an “everlasting possession” to Abraham and his descendants through Isaac and Jacob. Several hundred years later, the law was given at Sinai, and one of the conditions of disobedience would be exile from that land—however, exile with the hope of return. After centuries of exile, the Jewish people saw that hope realized and returned to reestablish sovereignty in their God-given land in 1948.

The ancient land of Canaan, referred to as Judea under Roman occupation, had been renamed Palestine in AD 135 and then occupied by one foreign entity after another until the defeat of the Ottoman Empire in WWI. Leaders of the Allied nations and their German counterparts divided up the Empire, not for occupation but to set up self-rule.

The Balfour Declaration of 1917 supporting the establishment of a Jewish state in Palestine was endorsed by the leading world powers at the San Remo Conference in 1920 and affirmed by the League of Nations in 1922. Israel had a right to the land just as Lebanon, Syria, Jordan, and Iraq—all created out of the same legal agreements—had rights to theirs. This legal foundation has not been annulled and is still in place today.

After 25 years of conflict between the Jews and Arabs living in the land, the United Nations General Assembly passed Resolution 181 in 1947, calling for the partition of the land and the establishment of both a Jewish State and an Arab State. The Jews immediately accepted the plan and established their state, but the Arab world rejected it and instead attacked the newborn Jewish State in an attempt to take all of the land. The UN Partition Plan was never implemented because the Arabs had rejected it just as they have rejected numerous other offers of statehood.

Since the Madrid Peace Conference of 1991, various initiatives and peace plans have offered more and more to the Palestinians and seemed to validate the claims by Israel’s antagonists that the Jews were giving back illegally occupied land owned by the Palestinians. But Israel’s willingness to negotiate and possibly even give away land did not mean the international legal claims to the land were now not applicable. Instead, Israel was negotiating with the land that rightfully belonged to her to obtain a peace agreement.

The increasingly generous offers of various peace initiatives under four US Presidents since 1991 were all rejected by the Palestinian leaders who seemed to be holding out for a better deal. What Western negotiators failed to recognize was Palestinian rejection is not about the details of any one offer but a refusal to sign an agreement with the Jewish State.

Signing an agreement with Israel means recognizing Israel exists, and that would be a betrayal of the Palestinian dream of return to all the land from the Jordan River to the Mediterranean Sea. It would also be a betrayal of the Islamic world that refuses to accept Jewish sovereignty on land that was once Islamic. Thirty years of Palestinian obstinance has created facts on the ground that need resolving, such as that of the Jewish communities in the West Bank.

Time to Annex the Settlements

Israel’s annexation of the settlements as allowed by the Trump peace plan is entirely legal. It recognizes the rulings of the San Remo Conference and League of Nations some 100 years ago. It should also be a wake-up call to Palestinian leaders that their continued rejection of peace agreements with Israel will mean less for them in the end—not more.