Brazil Will Move Embassy to Jerusalem 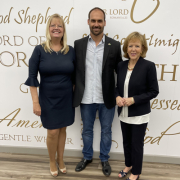 Dr. Mary Drabik, president of SFBC, welcomed attendees, emphasizing that SFBC would be a pro-Israel campus under her leadership and was so happy to be hosting the afternoon’s event.

Dr. Michael opened with a presentation about the various obstacles Israel currently faces, such as the threat of a nuclear Iran and the global Boycott, Divestment, and Sanctions (BDS) movement, fueling antisemitism worldwide. She then explained the multitude of reasons for supporting Israel.

One of her examples especially dear to people’s hearts at the South Florida gathering involved the Champlain Towers condo tragedy. When the building collapsed in Surfside, Florida, the Israel Defense Forces (IDF) deployed a rapid response elite squad to help with search and rescue. This team was credited with recovering 81 of the 97 bodies of victims due to their superior methods of mapping out potential locations. The Israeli squad won the hearts of their fellow American first-responders who lined the road and applauded as the Israel team left for home upon completion of the recoveries. This is just one example of the good hearts of the people of Israel committed to the Jewish concept of Tikkun Olam—“repairing the world.”

The highly popular Brazilian Congressman Eduardo Bolsonaro spoke about his country’s history with Israel and the deep support of the Brazilian people for the Jewish State. He recounted stories from trips to Israel along with his father, Brazilian President Jair Bolsonaro.

The highly personable leader was adamant that his father would honor his campaign promise to move the Brazilian Embassy to Jerusalem before the end of his term in late 2022, with developments closely monitored by the Evangelical Christians in Brazil. This news brought a great round of applause and appreciation for the leadership of the Bolsonaro family in Brazil.